Chronicling The Ridiculous Antics Of The Other Orange Cat.

Heathcliff may live in his own world but apparently his comic exists in the same universe as a lot of other cartoon characters. You may remember this comic from the very first post: 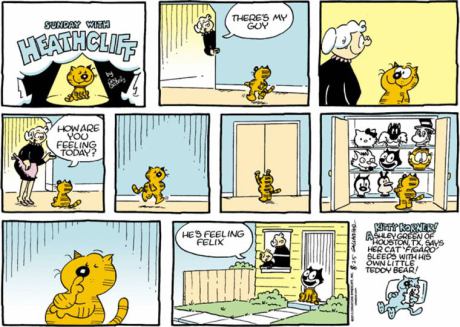 I find this cartoon the most hard to believe. Do you think Oscar the Grouch would be remotely pleased with Heathcliff’s brand of bullshit? I think not. Also, the garbage men would not be pleased to see Heathcliff, the cat who makes their jobs harder by just destroying everything and spreading garbage all over AND Oscar, who yells at them every time they come near his garbage can.

I wonder how Heathcliff and Oscar know each other, anyway. I find it difficult to believe no one from Sesame Street banned Heathcliff. And, let’s be honest, Heathcliff probably murdered Mr. Hooper. Or at least harassed him in his final days. Heathcliff definitely would try to eat Big Bird and Grover would be like, “I need to be faaaaaaaaaar from Heathcliff. Not neeeeeeear him.” Heathcliff wouldn’t mess with Cookie Monster though. No one would.

For Halloween 2013, we got a week of amazing comics. Including this one:

No damn way that Charlie Brown would go near Heathcliff. Good grief. But again, why did the cartoonist randomly draw this?

In August, one of my friends posted this Heathcliff comic on Facebook: 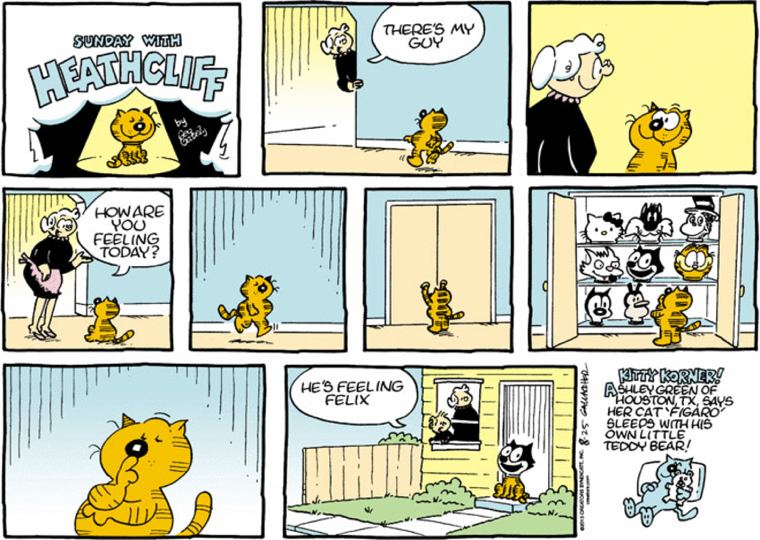 Soon after, I ended up exploring the GoComics Heathcliff archives and I haven’t really stopped. I never really got anti-comedy until I started reading Heathcliff. These comics are so unfunny and, very often, nonsensical that they crack me up. No, I don’t understand why. This blog is me finally listening to my friends and cataloging all the ridiculous Heathcliff comics I encounter. I’m do not own the copyright for these images, I’m just providing critical commentary on them. Crucial even. Maybe. It’s commentary or some sort.

Also: thanks to The Comics Curmudgeon for existing. Josh Fruhlinger’s site has been a frequent source of hilarious Heathcliff (and many, many other comics) commentary. Please read his site. So much hilarity.

You can find me elsewhere.

And here is my other blog: