Chronicling The Ridiculous Antics Of The Other Orange Cat.

Okay, so you’re telling me that Heathcliff is a smart enough cat to run complex schemes, help people open businesses and to have a bookie but sometimes he just does some dumb cat shit? Also, let’s talk about the logistics of a cat nip app. How does that work? Catnip gains it’s power from cats smelling and consuming it. How does looking at an app drive him crazy? Then again, I have met people who smoke a ton of weed and act downright crazy just looking at pictures of pot. I guess that could be what this app does.

It’s just weird that grandpa is teasing with Heathcliff using a phone app considering that he recently brought him to the vet because he was using his phone too much.

While we’re here, let’s talk about this collar. Heathcliff is smart enough to operate a phone, don’t you think he can just remove that collar whenever he wants? Also, what veterinary school gives out degrees that just say “Vet.” I don’t know any veterinarians I can ask but if you know of any, please ask them which shitty vet school is out here doing this.

Heathcliff is very confused. Why is she lecturing him on being nice to bees? Isn’t grandma just supposed to excuse his deplorable behavior by explaining that “HE REALLY LIKES BEES!” or some such nonsense?

Also: Grandma got some junk in that trunk.

Sorry to everyone who has been waiting for a new Heathcliff, For Why? post. You see, I’ve been very busy being lazy. I’d tweet about the new comics or post on Facebook but I’ve been neglecting the 8 people who read this. No more! 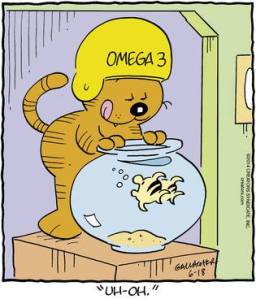 The omega-3 helmet. Is weird because Heathcliff doesn’t eat the fish. We’ve established that he just trolls the shit out of them on the regular.

Next up, we have the PEAS helmet. 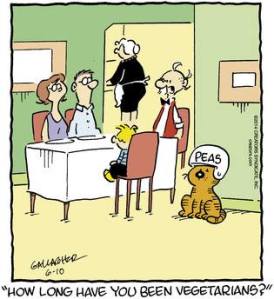 Why does this helmet exist? Heathcliff doesn’t even like veggies. Is he just planning to attack the people who are visiting because he hates peas? Is he going to steal their peas? What’s your game plan here, Heathcliff?

Whatever. Welcome to the Helmet Canon.

I have another blog where I blog about other things. On this blog, I have posted some of my stand up comedy among other things. Have a look. You can also follow me on Twitter at @ItsTheBrandi. I tweet about Heathcliff and a bunch of other strange things. It’s pretty random and all over the place but I like it.

Heathcliff doesn’t wear clothes very often and if he did, he wouldn’t be able to fit into any of these clothes. But let’s say Heathcliff did wear these clothes. They’re basically the same size as Iggy Nutmeg’s clothes. How sad would your life be if you had to live with your grandparents and share clothes with their lawless cat? Very. Pray for Iggy Nutmeg, y’all.

We have another update to the Heathcliff Helmet Canon: the HEY helmet.

I have many things to say about this.

Why is he wearing the helmet in this scenario? Heathcliff normally wears a helmet when he’s about to attack something. This helmet seems inconsistent with his agenda of socializing with people at the party. Also, who are these people at the party? The Nutmegs don’t seem to have that many young friends. And why is grandpa a waiter at his own party?

Pat, a friend of mine, pointed out that Heathcliff probably just told a racist joke. He’s probably not wrong. Also: are there any non-white people in Westfinster?

My friend Jeremy aka @afterglide on Twitter made Heathcliff Without Heathcliff. I suggested that Iggy Nutmeg was really Jon Arbuckle as a child and Jeremy suggested that Heathcliff needs its own thing like Garfield Minus Garfield. He’s right. I have invited Jeremy to post his work on this blog, so who knows if he will.

Meanwhile, my friend Sarah (who makes jewelry here) has explained why this improves Heathcliff on Facebook:

No, it makes exponentially more sense AND is funny! Wow. Garfield Minus Garfield just paints John as a nut, this creates believable scenarios with just a touch of wry humor.

Two old men saying “You say ‘bro” too much” to one another!? Hilarious! Iggy fretting about hearing the parole officer’s faux LOLs? Totally “awww” worthy! And telling the lady they’re all out of soup without Heathcliff and his big, dumb spoon turning it all to a giant health code violation? Well, I tittered.

First we learned about the HAM helmet.

Then we learned about the GRAVY helmet.

You won’t believe what helmet there is now, folks!

“Is it turkey or chicken wings?” – My mom

The newest Heathcliff helmet is….

Look, I don’t know which angel investor is funding Heathcliff’s bullshit businesses but he or she needs to stop. This is a stupid business model for so many reasons. How many adults can fit their heads into a helmet made for a giant cat? How many cats have money? How many of the kids in town (who happen to be the same size as Heathcliff) want a kale helmet? And why does Heathcliff like kale? He doesn’t. He robs butchers and fish mongers. He sells beef cider. Kale? Oh kaaaale no!

But can I be honest with you guys for a second? If I saw a cat selling helmets on the corner, I’d probably buy one. That’s hilarious.

Anyway, I can’t wait to see what helmet will be added to the canon next!

Next up, at some point, will be the cat-machine canon.

But first, some important Heathcliff news:

I have located information on Non-Actor Peter Gallagher from his Alpha Comedy profile!  We’ll talk about it more later.

Onward to the non-Heathcliff news. Since no one has asked, yes, I do have other writings on the internet. I have a sporadically updated blog called House of Procrastination and I am on Twitter as ItsTheBrandi.

Here’s a picture of Riff-Raff and Cleo in a giant hot air balloon shaped like Riff-Raff’s head. 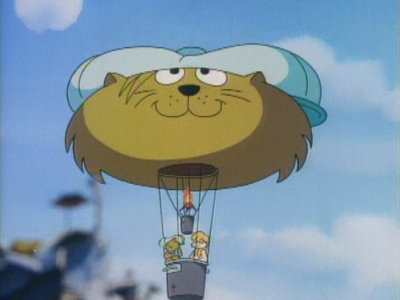 Ladies, if your man picks you up in a balloon shaped like his head, you best lock that man down.

Next, it has come to my attention that Josh over at The Comics Curmudgeon has linked to this blog. Yay! He has some breaking Heathcliff news that I tweeted about but was too busy watching terrible television to blog about. Check it out!

Earlier today I went to Popeye’s and my grandma gifted me a set of warm pajamas. Then I sat at home and watched television, including the wonderful Kroll Show. I only tell you this because it sets up what an amazing day I was having BEFORE what I write next happened.

Before the show aired, I’d heard he was going to be a guest on the show but had no idea what he’d be doing. I sent him a tweet about my hopes for his appearance and referencing an earlier exchange about Heathcliff. AND HE REPLIED!

Anyway, I know you read this blog because of the hard-hitting investigative reporting about Heathcliff that you can’t get at places that shell out for custom domains. I’ve been trying to track down more information about “Non-Actor Peter Gallagher” (that’s what my friends and I call the cartoonist). So far, I’ve located original Heathcliff cartoonist George Gately’s obit. I also spent 2 minutes Googling. Interesting tidbits from the LA Times obit:

Heathcliff, named after the major character in the classic Emily Bronte novel “Wuthering Heights,” was indeed a success. The strip, offering the adventures of the smug fat cat, predated by several years “Garfield,” another strip with a feline star.

Everyone can shut the hell up and eat some lasagna because Heathcliff was first.

“[Heathcliff] had this great idea of himself, his importance,” John Gallagher said. “He would go to get his family tree traced but was also a hellion who had his own bookie.”

“He would go to cat shows around the country and people would come seeking autographs, not for themselves but for their cats,” John Gallagher said. “So he would sign his name [and] ‘Good Luck, Tabby,’ or ‘Best Wishes, Spike.’ “

Gallagher recalled that one woman asked for a particularly odd inscription.

“Her cat was named Hitler, so somewhere there is an autograph from George Gately reading: ‘Good Luck, Hitler,’ ” Gallagher said.

WHAT IN THE LIVING FUCK?! If someone asks you to sign something for their cat named Hitler, you say “no.” You always say no.

“When you look at the features that have been successful, you notice that they’re usually very simple, and deal with things that people of every circumstance can relate to. . . . I’m very careful to never make the home in my cartoon look too fancy. I’m as interested in having the poorest person relate to Heathcliff as I am the richest person.”

Poor people don’t get new furniture ever day. There is absolutely no consistency in that house. There’s a fridge that moves around the kitchen. Yes, this will be a post. My friend, Pat, gets very upset about the fridge moving around.

You can find me elsewhere.

And here is my other blog: